Wow!  It has been a really long time since I have posted anything.  My regular job has been incredibly busy, so I haven't had much personal time.  This is what I have been working on though.... 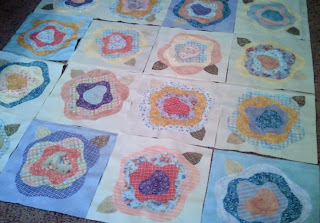 I saw a quilt made with this pattern at my local quilt store several years ago.  I bought several (way too many!) fat quarters at that time of Charms designed by Nancy Halvorsen for Benartex. 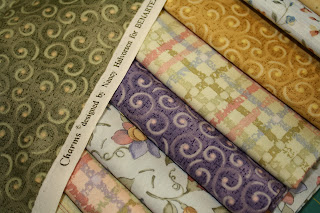 I am using a pattern called French Roses by Heather French.  (I still found one for sale here and made by someone else here.)  It is a raw-edge applique method - so will look much better after washing!

I cut out shapes using templates provided in the pattern.  This is my first time not using a rotary cutter to cut everything out, but it didn't take as much time as I thought.  Just did it while watching TV for a few nights. 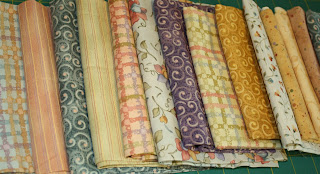 They take quite a while to sew together though.  And, I've been having a hard time finding enough time to get sewing done with the little kids. :(  Here's a close up on one: 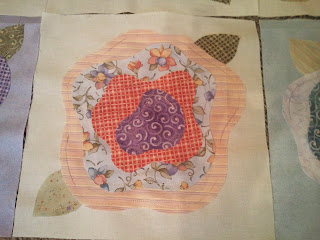 I have 21 blocks down, and 21 more to go!!  I have modified the size a bit....I'll be making it 6 x 7 blocks instead to make it more of a twin size quilt.  I'm also using a variegated thread, which you can kind of see in photo above.  It matches the colors of the fabric perfectly and I really like it so far.  Also, because I have so many left over fat quarters of this fabric, I think I will sew together the fat quarters in a simple patchwork for the backing.  Hoping to get it done soon!!!
Posted by Debi at 10:07 AM No comments: 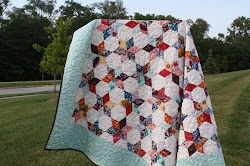